Well, that previous tutorial was surprisingly well received. I’m glad you guys liked it, and look forward to seeing the results of anyone who has a bash at it themselves!

As I’ve not had much time to paint this week and in light of the Molten Skin guide being quite easy to throw together, I figured I’d write up a guide on how I do the other signature part of my army – my lava bases. This took even less effort on my part than the previous article, as I actually did this years ago for a Facebook group I’m a part of, but again – putting any guides I do in the same place, with proper write-ups seems a good idea.

So, let’s get started. The first step is, naturally, to build an actual base for the model to stand on. There are many, many approaches for lava bases out there, with even Warhammer TV chiming in with a nice, if understated effect using Martian Ironearth, but I’ve always preferred the look of larger lumps of rock floating in the lava. Yes, it’s impractical, and some of my guys are quite ridiculous when you stop to think about them (My Chosen should really stop posing and find some better footing, to be honest), but the look is striking and the extra elevation helps give every marine some presence. When the rocks are glued together, I would recommend getting some sandpaper and smoothing down the edges of the rocks a little – not too much, but enough that flakes of cork won’t break off every time you play with the model.

The approach is very simple – tear up some cork floor tiles (linked above) and superglue them to the base. Cork is an incredible tool for creating lumps of rock, urban debris, small cliffs – loads of stuff, really. I know some painters consider themselves above it, and I will admit that it can look rather same-y across multiple armies, but in lieu of actual rocks or sculpting skills, it does the job fairly nicely. Make an island (or several, depending on base size), add a few chunks that float freely in the lava flow, and you’re halfway done already. If you want some variation, you can double or even triple up layers as I did with my Renegade Knight. 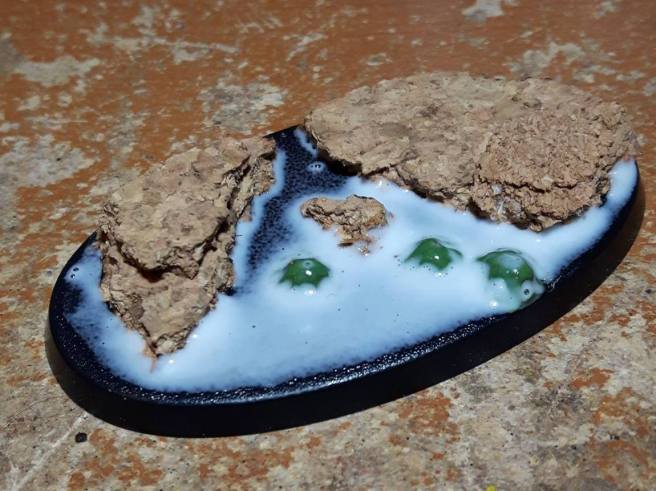 If you want and you have the space, you can also add some bubbles. This has to be the part I get asked on the most, but honestly, it’s probably the simplest aspect of the base – you take a ball of green stuff, superglue it to the base, then squidge the sides down with a modelling tool. That’s it.

Once any bubbles and rocks are secure, an optional step I’d recommend is to give the whole lava part of the base a thick coat of PVA glue, deliberately lapping up the sides of the rocks. This will help smooth out the plastic texture of the base itself, and also make the lava look more viscous when painted.

Before we move on, a point on positioning. As we’re doing a 3D base rather than just a flat disc for a model to stand on, placement of the rocks is important. Think about where the model’s going to stand, whether any dangling bits (cloaks, weapon hafts, etc. Get your mind out of the gutter) will collide with the rocks, and so on. With bigger models, you’re almost certainly going to want to pin the model through the cork and the base, so having a path for the pin in mind is also a good idea.

Anyway – with that done, let the base dry, undercoat it black and move on to step 2!

With the base built, we can now get started on painting them. The first step is dead simple – a heavy drybrush of Mechanicus Standard Grey on the rocks (A point of trivia; ‘Mechanicus Standard Grey On The Rocks’ is a popular if exceptionally bland cocktail found on Mars). You want to really get into the recesses here, as we’re going for a grey, not black look (although I suppose you could also go for much darker rocks if you want). Not a whole lot more to this step than that.

As a side note, you can see in the photo above that the bubbles do a decent job of looking like part of the base now – the PVA glue really does help.

Next step is a lighter drybrush of Administratum Grey, focused on the edges of each rock. You can tailor this to taste, as with the previous step – I’ve experimented with just using Dawnstone, or even using colours as bright as Ulthuan Grey if I’m going for something really striking.

With that, the rocks are done – not much more to say, rocks aren’t very exciting. On to what you’re really here for – the lava!

…Okay, I lied – we’re not quite done with the rocks, but we’re doing something at least lava-related. You see, lava glows. Without some ambient light bouncing onto the rocks, the lava will just look like orange water. Fortunately, creating ‘object source lighting’ (OSL) for this is incredibly easy – it just takes a directional drybrush of a few colours.

Firstly, you’ll want a bright, warm red – Evil Sunz Scarlet is a good choice – which you use to drybrush onto the rocks, starting at the bottom and moving upward. You can be quite rough with this; the goal is to build up a good heavy glow and arguably any part of the rocks protruding over the molten lava should be lit up. If you’re feeling really brave, there’s nothing stopping you doing this on your painted models too, although I tend to not bother as the signature ‘lava trousers‘ my guys wear would fight with an ambient glow for attention on the base. 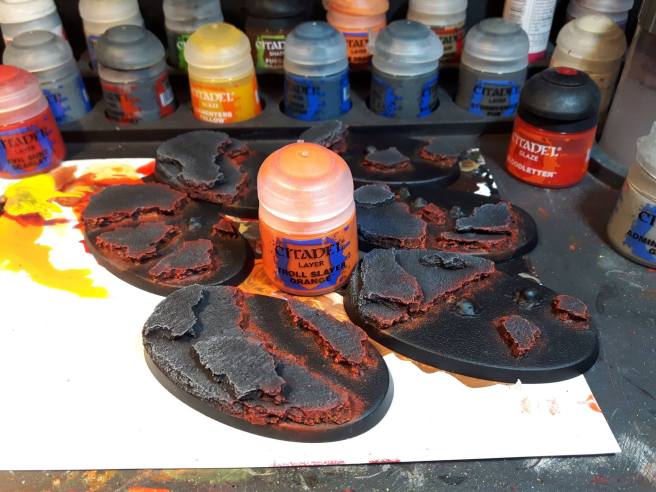 With the red done, you then repeat the process a bit more gently with a bright orange, focusing this on the areas closest to the lava. I used Troll Slayer Orange, as the next colour up – Fire Dragon Bright – is a bit desaturated for my purposes. If you want though, you could keep doing this and go all the way through to yellow, really intensifying the glow close to the molten part. Go nuts!

Now we’re done with the rocks.

For the lava itself, the first step is a good solid red foundation. Mephiston Red is perfect for this – bright and vibrant, which is exactly what we want. Slop it on heavily all over the lava (including the bubbles), but try to avoid any brush strokes being visible, as these will stand out later.

An optional stage here is to add a shade. I used Fuegan Orange, and the effect is subtle – it pulls the drybrushed glow on the rocks in together, and also adds a bit of definition to the bubbles. That said, I often skip this stage out of laziness, and I have yet to have anyone else point out the difference. 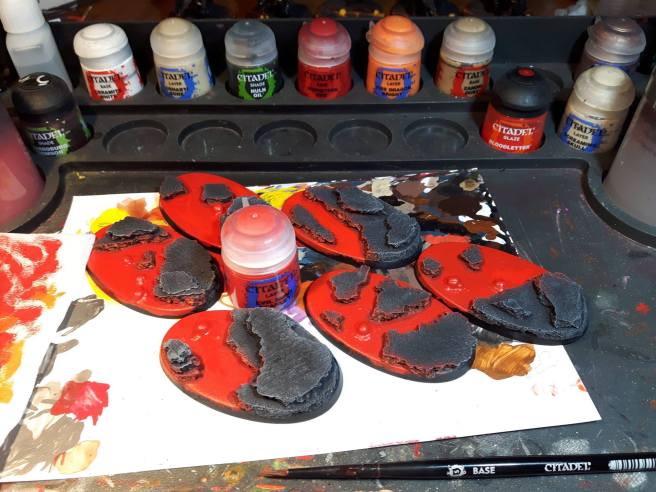 Once the shade is dry, you can start layering colours on. The process here is an inversion of what we talked about in my Molten Skin tutorial – we start with the duller reds in the coolest areas, then build out to bright oranges and yellows where the lava is hottest – i.e., the furthest away from the floating rocks (I have no idea if this is how lava works in real life, but it looks good).

The first stage is to get an even coat of Evil Sunz Scarlet over the Mephiston Red, leaving a thin band of Mephiston around each island. If you want, you can vary the width of the bands, suggesting lumps of solid rock below the surface or a fluctuating temperature.

Repeat with Wild Rider Red, again leaving a band of Evil Sunz Scarlet visible. You can feather these divides if you like, but I don’t tend to find that necessary once the glazes are down.

For Step 10, I followed Wild Rider Red with Troll Slayer Orange, but forgot to take a photo – you can probably figure out what to do with it from the above, though.

Next is a glaze. As with the Molten Skin tutorial, you can use Bloodletter here if you want – it’ll pull the layers together and add some brightness – but personally, I’ve been using Fluorescent paint for this. The sheer vibrancy of the paint adds a lot to the base, and really catches the eye – if you can get hold of it, I thoroughly recommend it.

The glaze is a 2:1 mix of Lahmian Medium and Vallejo Fluorescent Orange, and is applied across all the lava. You can also splash some up the sides of the rocks to great effect.

When the glaze is dry, you pick up where you left off with Fire Dragon Bright, once more leaving bands of darker colours. You might find now that you’re down to just a sliver of colour in some places, but that’s fine – the high contrast will really make the base pop.

You may notice that at this stage I’ve also edged the base in my brightest colour, creating a nice ring of fiery orange. I’ve also deliberately left a perimeter of darker colour around the base of each bubble – this might be woefully unrealistic, but again, the intent is to make the bubbles pop (no pun intended). 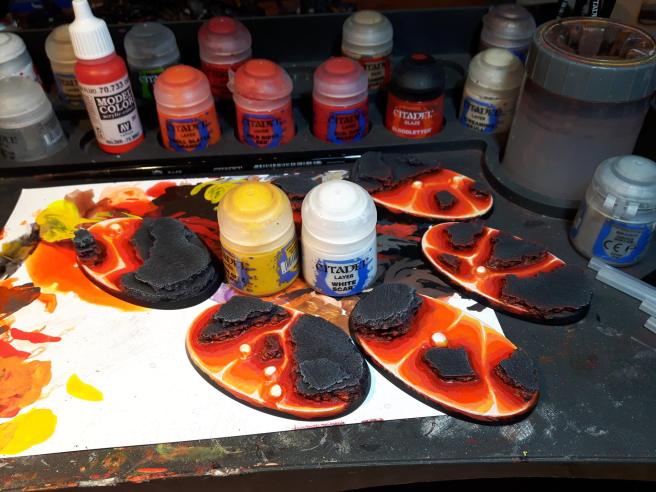 Almost done! Ideally you should now be down to just a few thin strips of bright colour, and in some places as you can see above, you don’t even want to add any more.

This photo was taken after I had added Flash Gitz Yellow, and then finally a very small amount of pure White Scar on the tops of the bubbles and the absolute hottest parts of the lava. The white may need a few coats to get an even surface, but it’s worth it.

Finally – for the layering, anyway – we add another glaze, this time of Vallejo Fluorescent Yellow. I only added it on the brightest areas such as the bubbles, really making them stand out.

With Step 15 done, the bases are pretty much finished! You can see the bases used for this tutorial above, with my converted ‘Skullreaver’ cavalry mounted on them.

There are a few finishing touches that I’ve taken to adding, which you can just make out above. Firstly, I add a band of black around the edge of the base, tidying up my inevitable mistakes. Then, using Abaddon Black, I like to add a smattering of black flecks to the lava, mainly in the cooler areas near the big rocks, and finally shade the recesses with a little Agrax Earthshade. The flecks look like tiny floating bits of rock, and the shade adds a tiny bit more contrast, while also cooling down the recesses a bit.

Since taking the pictures for this tutorial, I’ve also taken to adding some texture paint to the rocks before undercoating. Which one you go with doesn’t matter – I use Mourn Mountain Snow, of all things – but the texture adds some variety and makes the rocks look a bit less unnatural. There’s a collage of some of my best bases at the end of this post that demonstrate this in action.

That about sums this tutorial up – I hope it’s of use to some of you, and as always – if anyone does make use of it, please let me know and share your creations!

View all posts by Prometian Painting